Bi-place or duo paragliding is a very easy way for non pilots to get in the air without paying an expensive airway ticket.

During my training we performed different exercises as big ears, wing overs and even short 360's.
One of the extras we performed was landing and starting at the winch without putting the glider on the ground between, so we did three flights on a row. 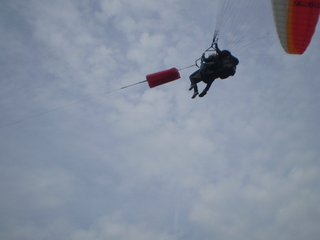