Saint Hilaire du Touvet is a village in a nice valley near Grenoble in the south of France.
In September 2007 I came here to Coupe Icare, an annual free flight festival.
I did some beautiful flights here starting from the cliff above Saint Hilaire, 1800m down starting with a wall of rock from 1200m strait down!
But above all it's a great festival with different flight acts and stunts from as well amateurs as pro's. There is also a large fare where you can find any equipment or tool you 'd like. The village really seems to change in paragliding world. In the evening there are also nice shows and little party's.

Really a recommendation to as well pilots as tourists. 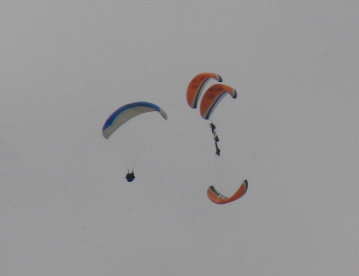