Saint Adré les Alpes is a small town near the Haute Verdon in the South of France.
It's a beautiful region with a mayor landing spot near the lake.

The first time I came here was in the summer of 2007 and later that year I came back in the winter.
Most of the time I stayed in a very causy gite called "Chez Amandine". Its an old farm with large rooms decorated with a lot of brocante.
You can stay here for a sweet price and Amandine cooks a great home grown meal for you every evening. You just have to call her when you'll be back.
Amandine paraglides herself, actually almost the whole village does. 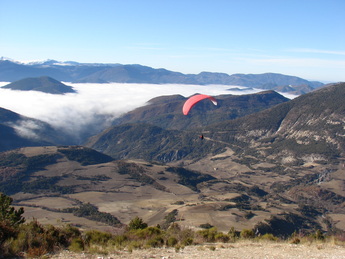