Monaco, a little financial paradise in the south of France near the Mediterranean sea. But also a nice paragliding spot.
Actually the Take off is Roque Brune just a few kilometres outside Monaco. And when you have some good thermals you really can fly to Monaco.

This spot is only open during the winter because the landing is on a small beach.

My first and only flight here was on 31 December 2007. We woke up in Saint Andre les Alpes with -12°C, drove a few hours south, had a hard time finding the take off and left the start with + 25°C, 37°C difference! At first it seems to be a little "plouf" flight. But just above the beach where I was supposed to land, I found a good  thermal and flew around for almost 2 hours. It was really an amazing flight with a magnificent view, on the last day of that year. 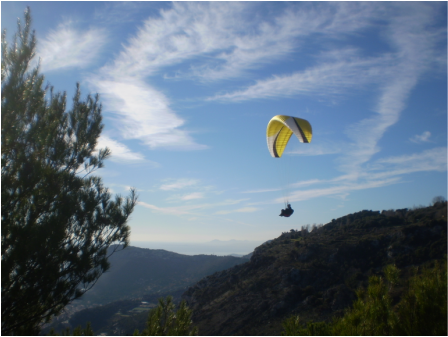